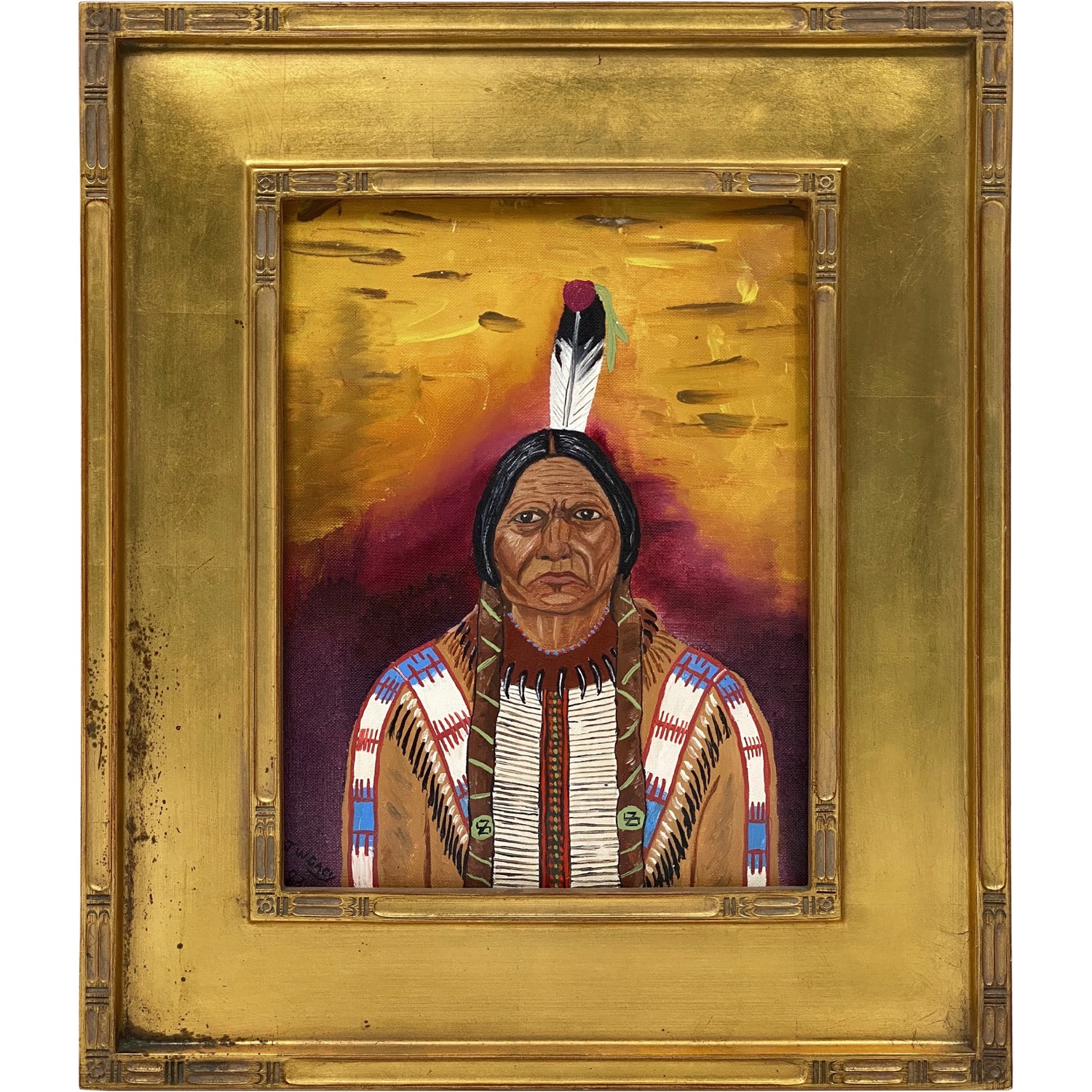 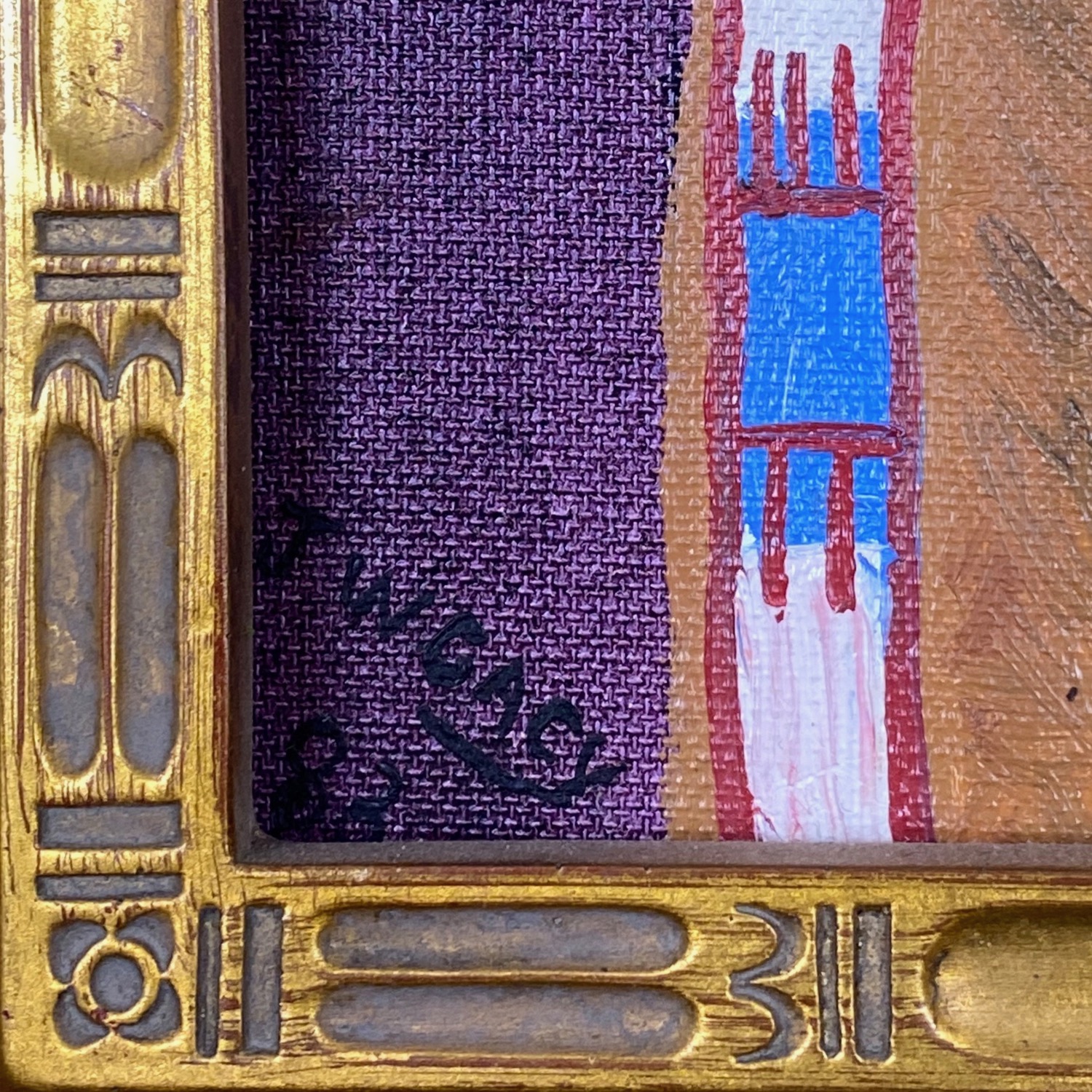 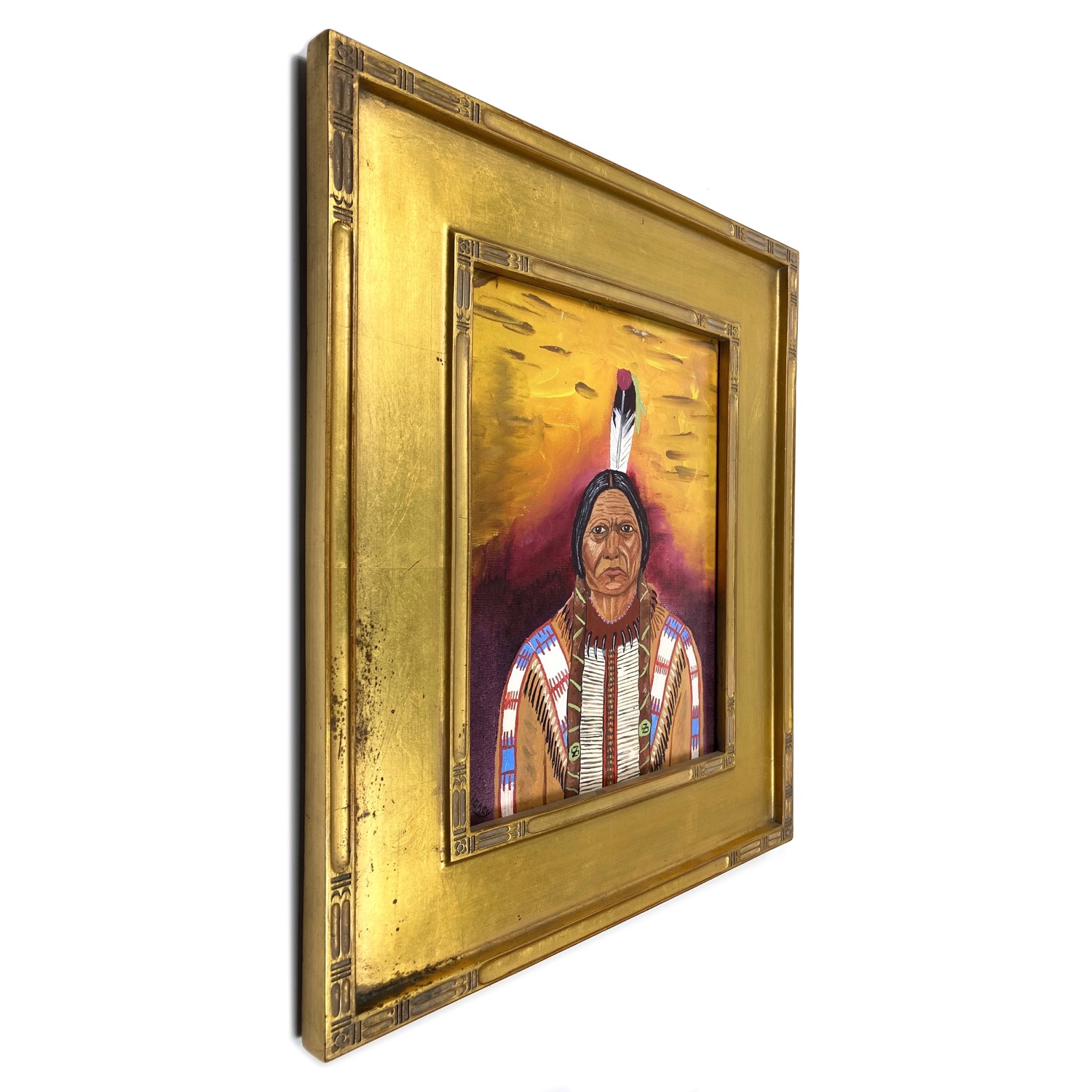 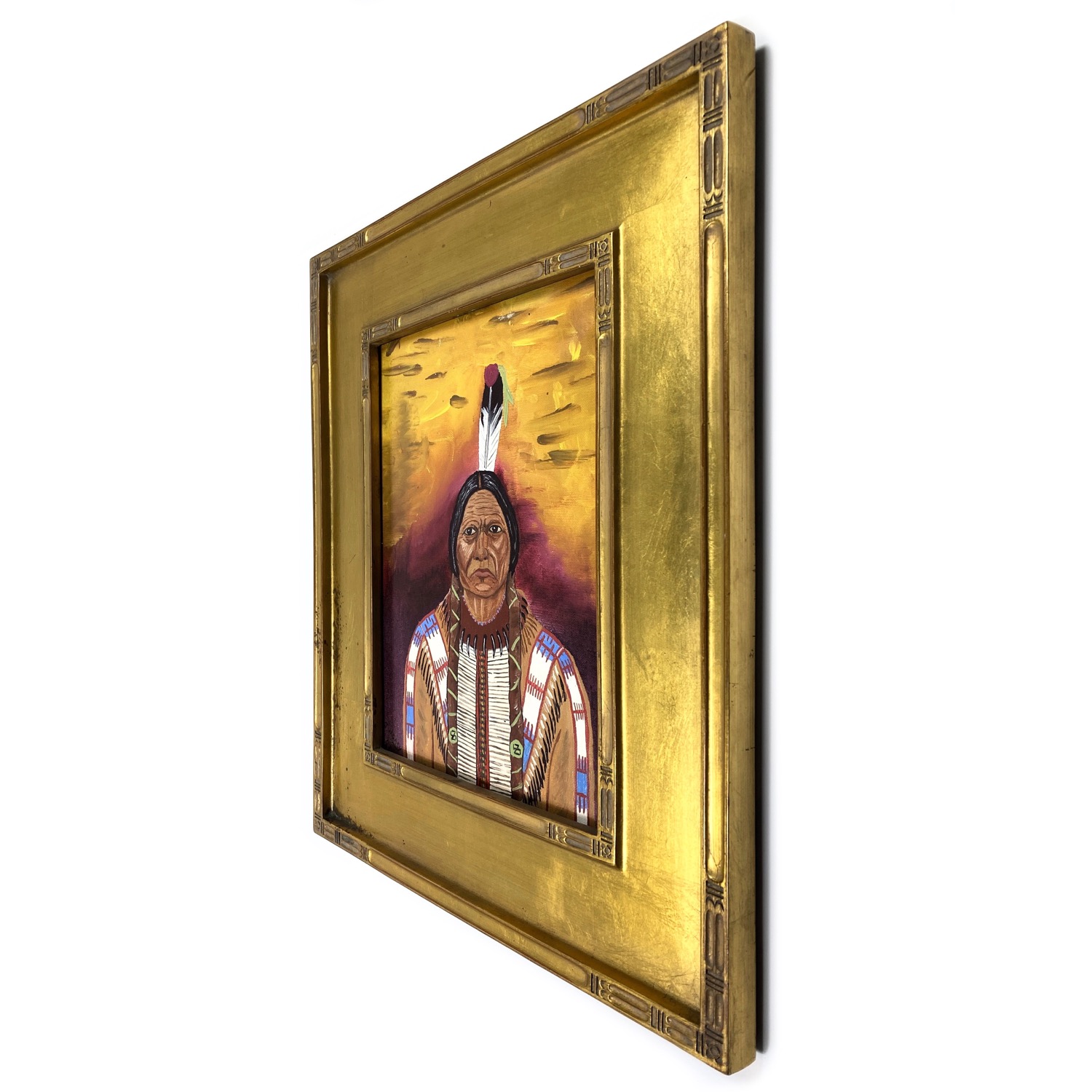 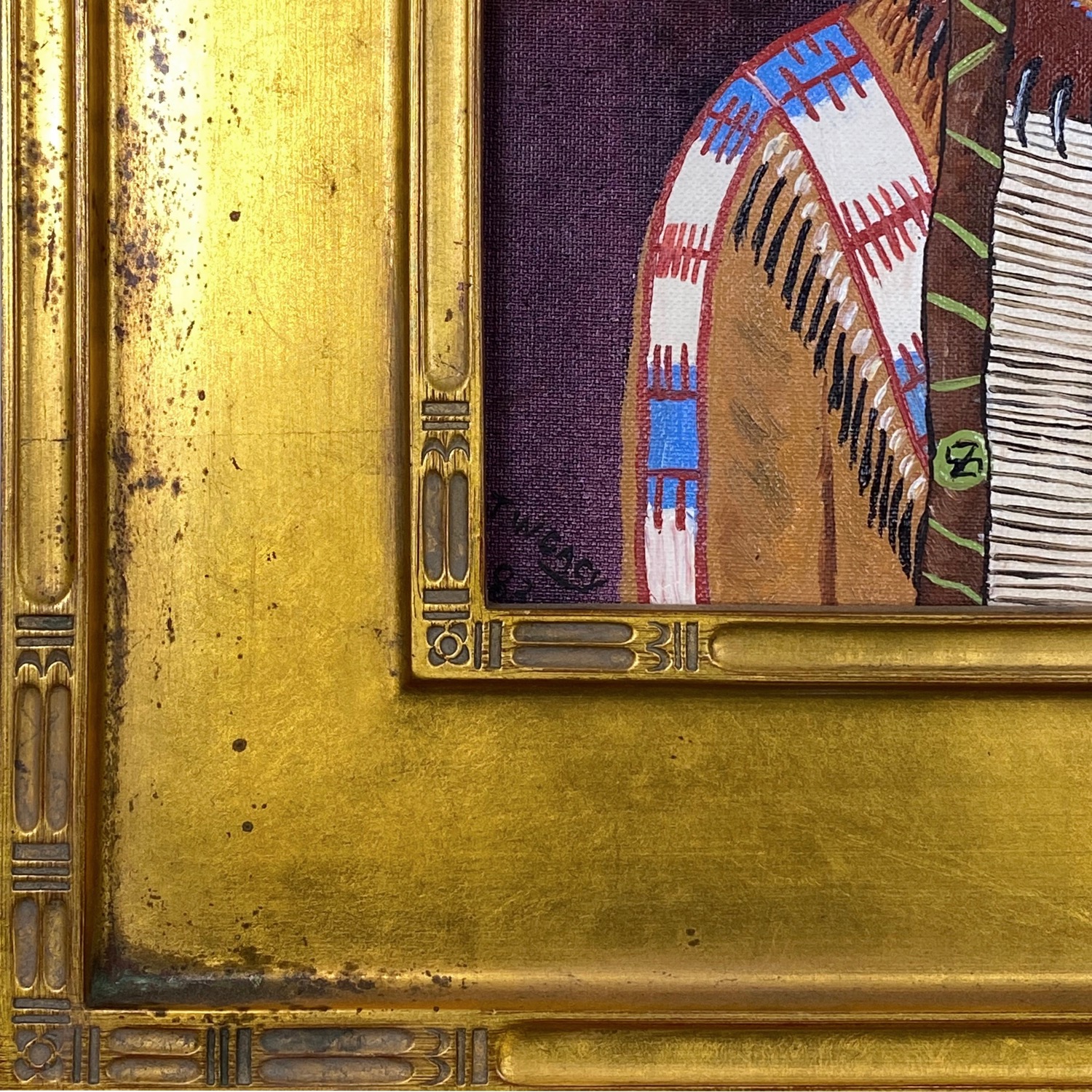 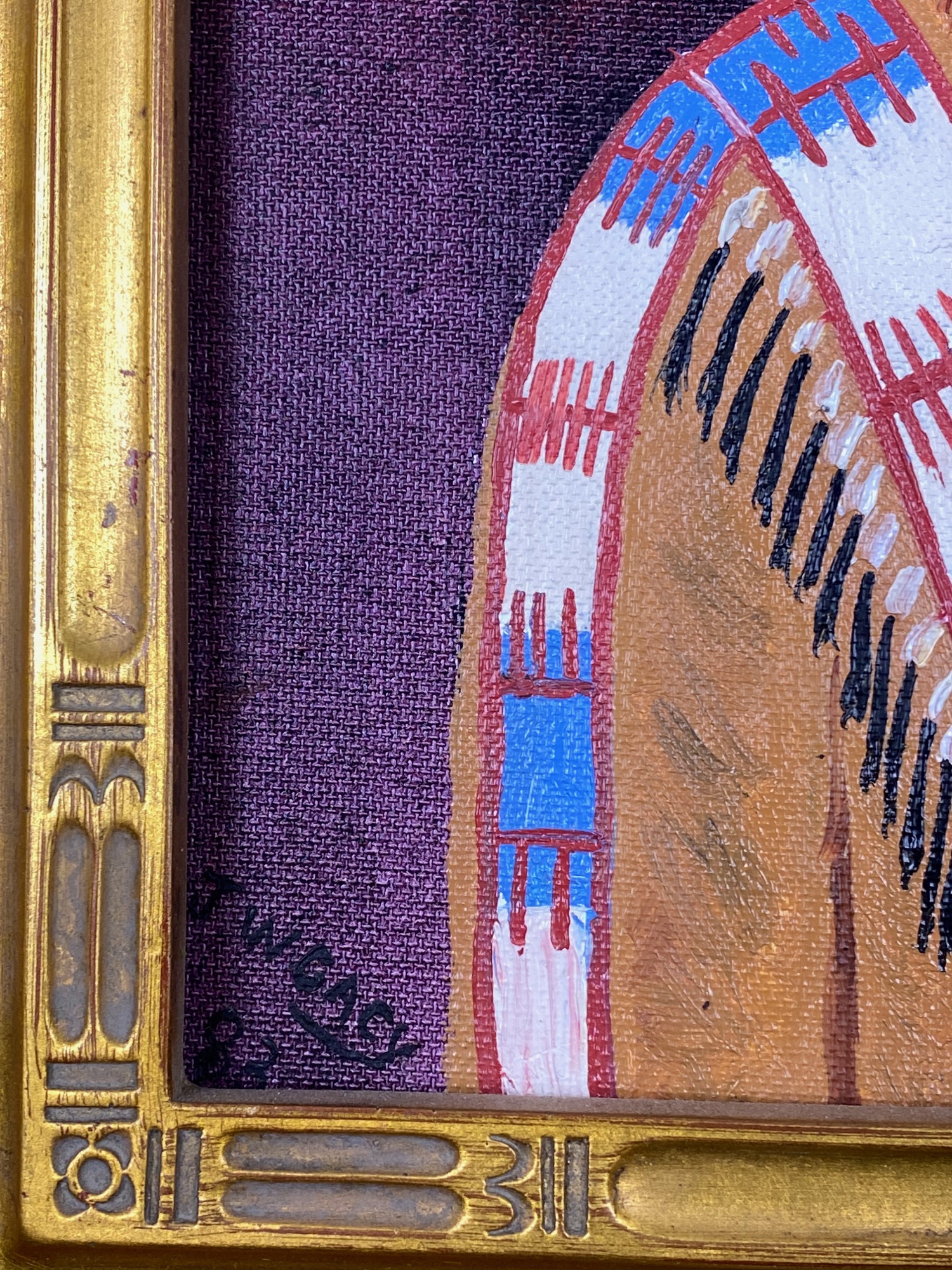 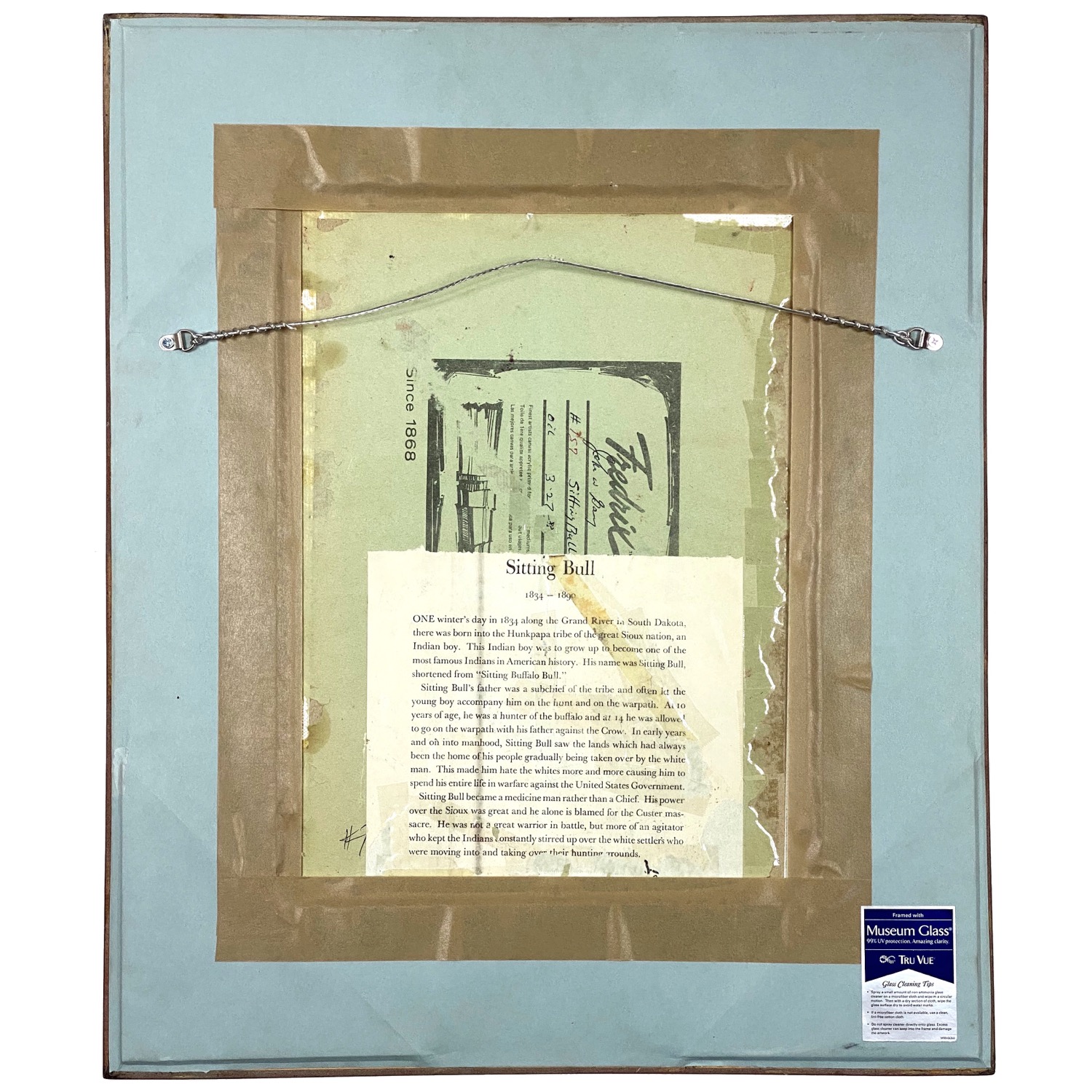 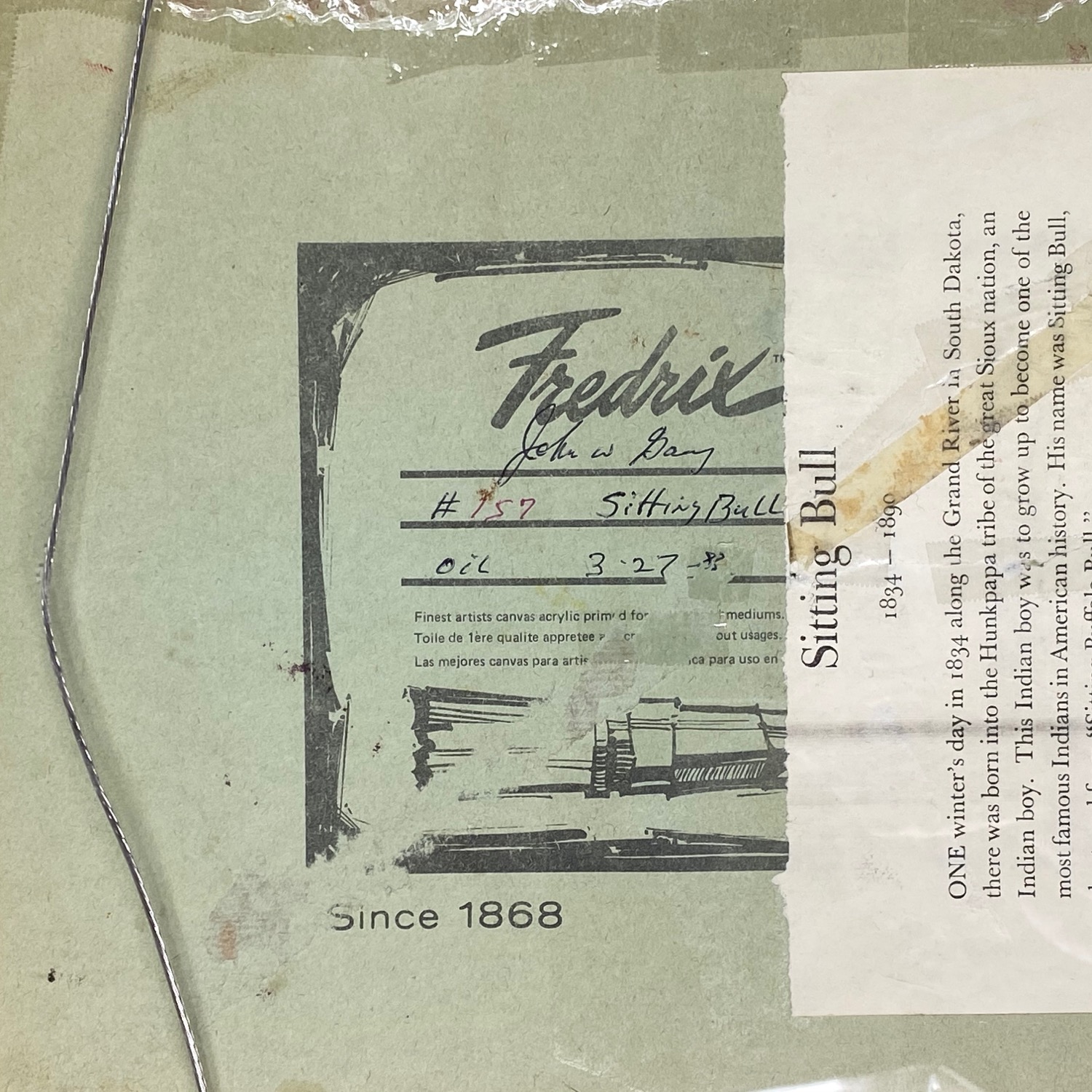 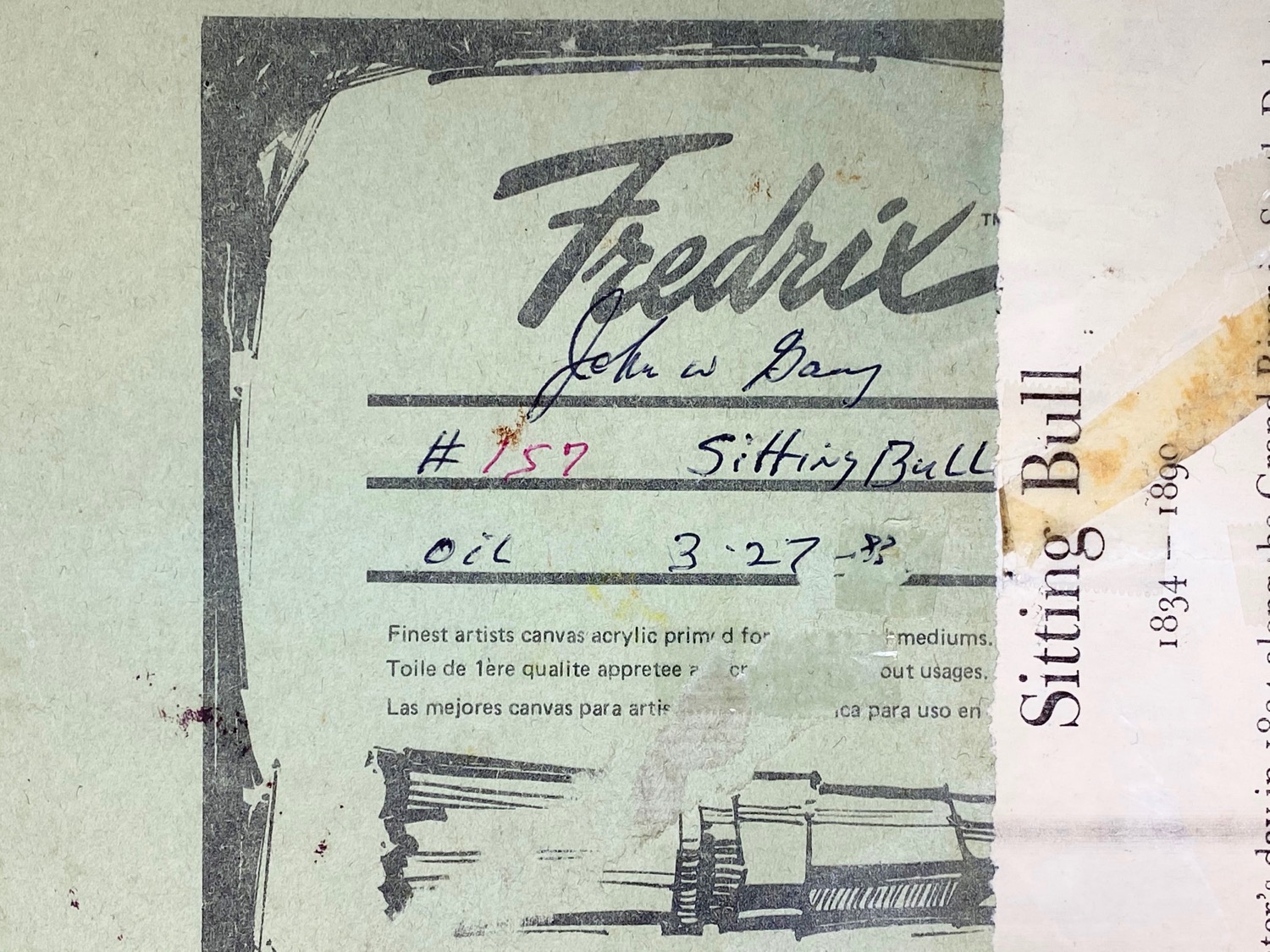 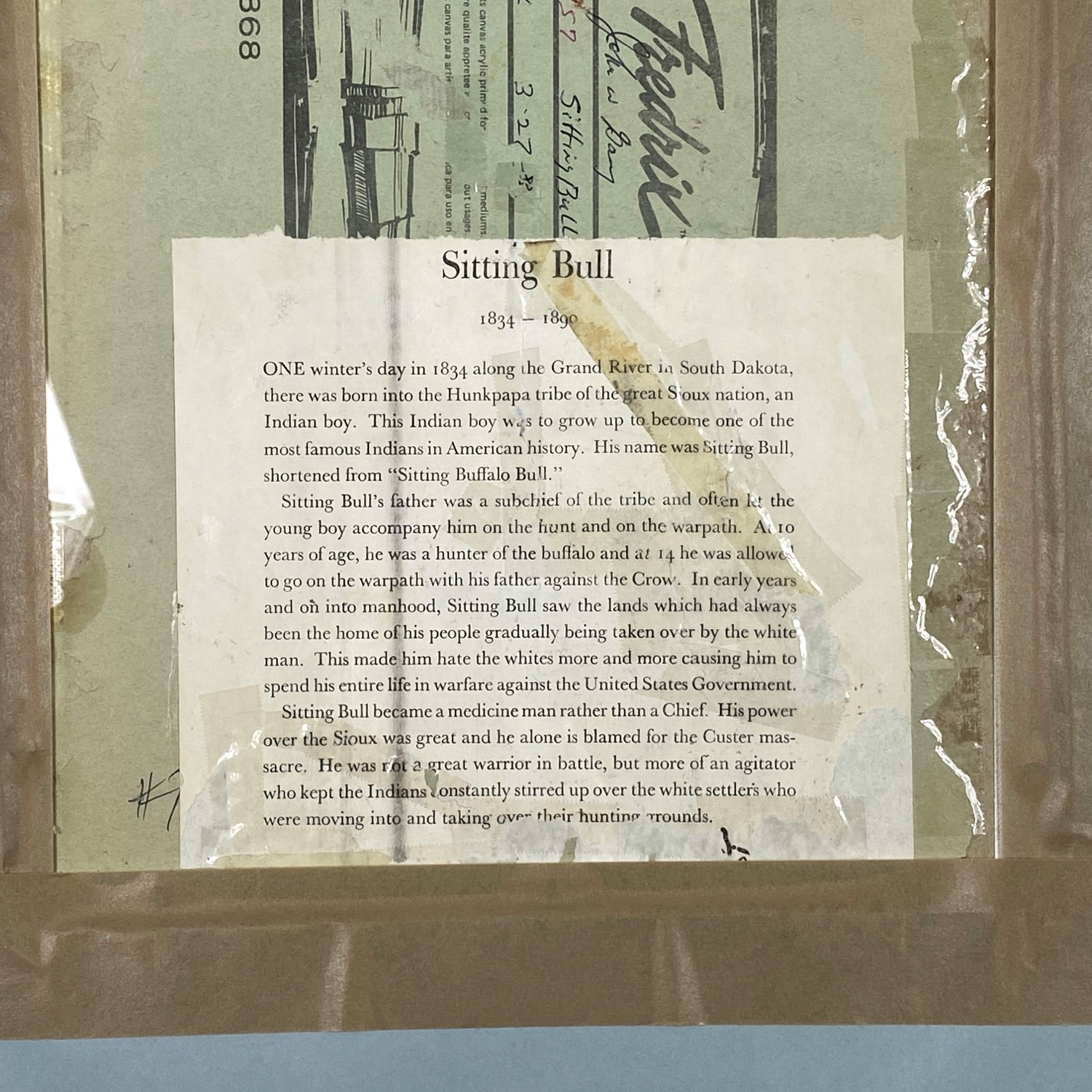 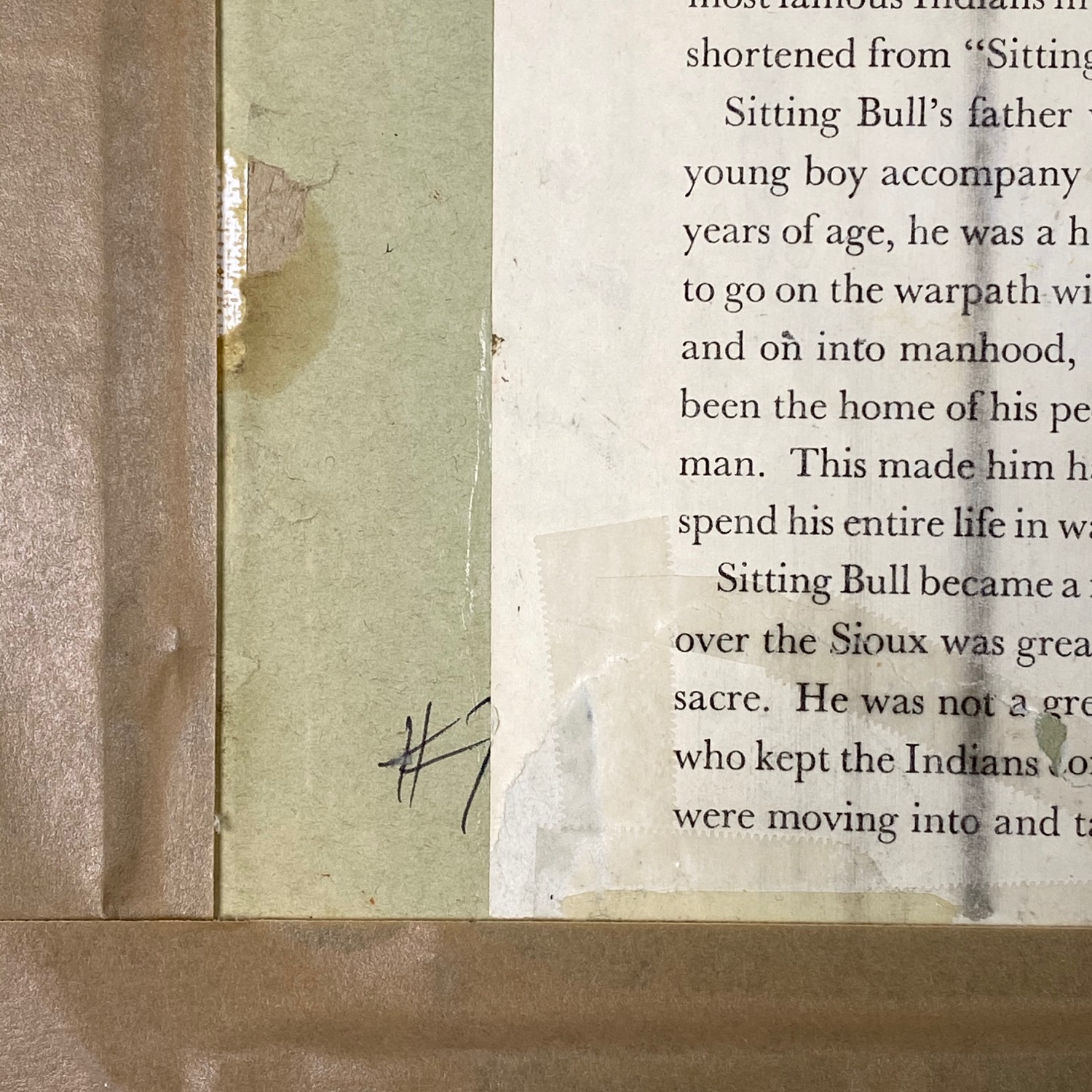 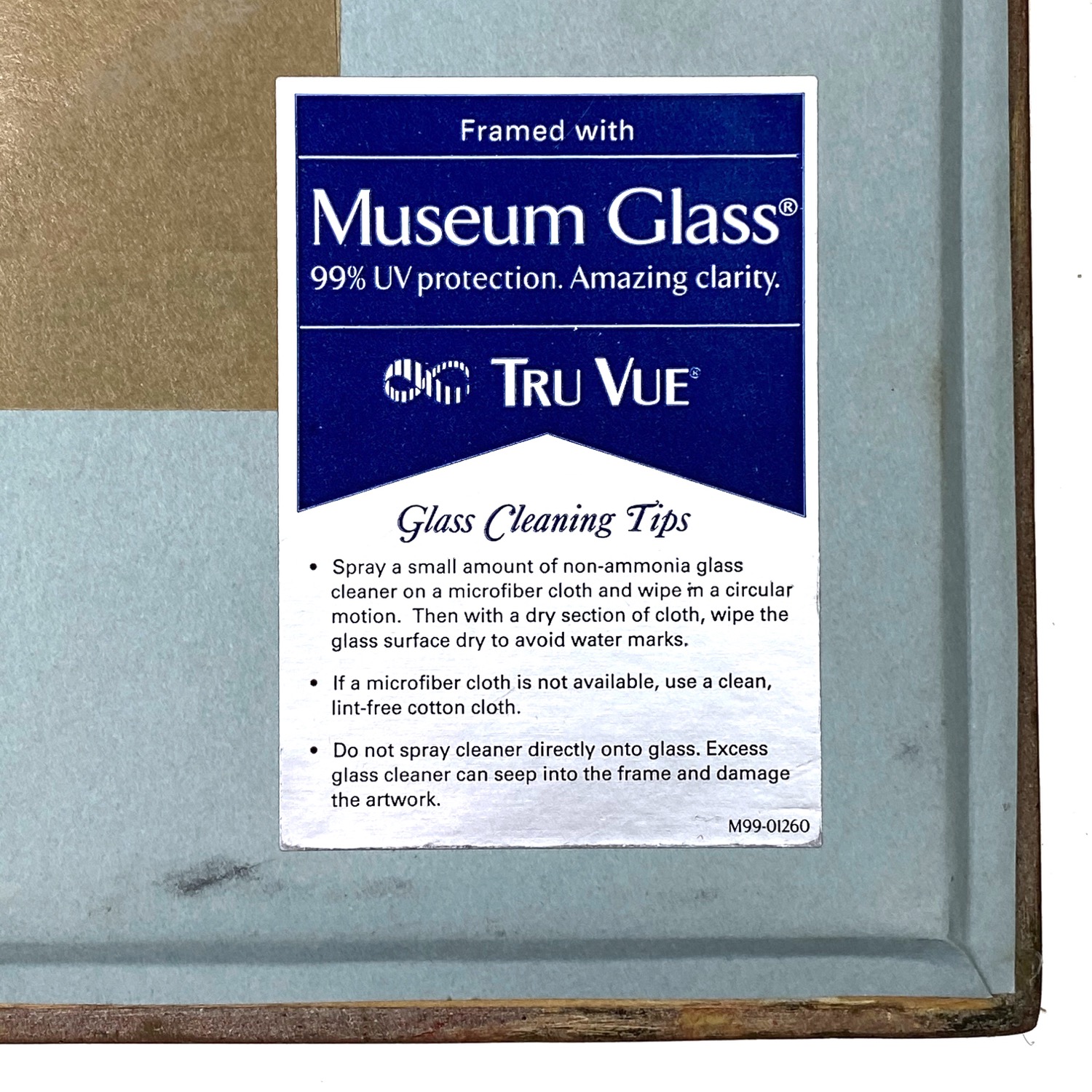 Original oil painting by convicted serial killer John Wayne Gacy (1942-1994) – This is painting #157 and was completed on 03/27/1983 as referenced on the back in handwriting by Gacy himself. Double signed (in paint lower left front, and on reverse ink.  The piece is framed with a clear backing so that the backside of the painting with original signature, number and date, as well as a taped clipping describing Sitting Bull that Gacy attached to the back of the canvas or possibly mailed with it to the original acquirer.

The frame is a vintage frame with patina and stains that were on the surface prior to the framing. It is a hand carved gold leaf high quality frame, professionally framed behind True Vue Museum Glass.

Wikipedia : John Wayne Gacy (March 17, 1942 – May 10, 1994) was an American serial killer who raped, tortured and murdered at least 33 teenage boys and young men between 1972 and 1978 in Cook County, Illinois (a part of metropolitan Chicago). All of Gacy’s known murders were committed inside his Norwood Park ranch house. His victims were typically induced to his address by force or deception, and all except one of his victims were murdered by either asphyxiation or strangulation with a makeshift garrote, as his first victim was stabbed to death. Gacy buried 26 of his victims in the crawl space of his home. Three other victims were buried elsewhere on his property, while the bodies of his last four known victims were discarded in the Des Plaines River.

Convicted of 33 murders, Gacy was sentenced to death on March 13, 1980 for 12 of those murders. He spent 14 years on death row before he was executed by lethal injection at Stateville Correctional Center on May 10, 1994.

Gacy became known as the “Killer Clown” because of his charitable services at fund-raising events, parades, and children’s parties where he dressed as “Pogo the Clown” or “Patches the Clown”, characters that he had created.